Melinda Johnson – new DH Commercial Director, recently spent some time Connecting as part of her Induction to DH life, Melinda has shared her experiences Stepping out on the NHS Front-Line here:

What an amazing experience the DH Connecting Programme is! I am the new Commercial Director at DH. Having come from the Department of Transport and previously from Department of Education it was important to me to quickly get to know the health sector from the inside. So I was introduced to Jane Ellis who put together a really good programme for me.

My first Connecting placement was at Guy’s and St Thomas’ NHS Foundation Trust - I went there for two days and I must have done 10k steps each day there alone, walking up and down corridors, responding to bleeps, prioritising all the time, it was a complete whirlwind! I saw first-hand the issues involved with caring for a lady with a serious mental health condition. The staff were so good with her, very patient and extremely kind.

I took a break by taking an older lady who had dementia down to the Trust’s shops. The staff working in the shops at St Thomas’ Hospital were also very attentive and thoughtful. That place just oozes kindness - in spite of everyone being so very busy.

I then had the great privilege of shadowing the medical team from the Place of Safety mental health facility at Birmingham and Solihull NHS Trust. The facility was created so that the police can bring people who are suffering a mental health crisis outside of their home to the facility for support. Prior to it being there, the police could only take the person to A&E or to a police cell. The idea is that patients are treated and then go to their own homes with care and support.

I found myself going into people's homes listening to them explaining their symptoms of paranoia and schizophrenia. It was incredibly interesting, but very humbling. I met patients who were manifesting shocking views on unlawful and unethical issues due to their illnesses, as well as people who were suffering the effects of extreme drug abuse.‎ One lady patient had us running around the street trying to find her but thanks to her mum and a shopping trolley (a story in itself) we did.

The chief executive of Birmingham and Solihull Trust is so passionate and impressive - he really educated me about mental health - and was generous with his own time as were his team. I spent a wonderful afternoon with dementia patients, taking part in their therapy sessions that included 'Reminiscing' and 'Music Appreciation' which helps to structure their day. I laughed until I cried with two older people about a story involving Dolly Parton - I'm sure you can imagine - and it was wonderful to see such fun being had.

Finally, a couple of weeks ago I spent a day at Sue Ryder Thorpe Hall in Peterborough. As Sue Ryder is a charity, patients at Thorpe Hall Hospice do not pay for their care. Sue Ryder have built ‎a new purpose-built annex for specialist palliative care beds in the kitchen garden of the magnificent Old Hall. There are beautiful rooms that all have en-suites, and French doors onto the gardens so that patients 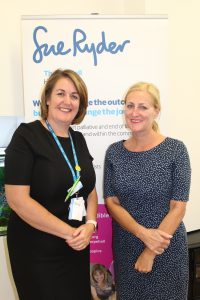 can be wheeled out in their beds on warmer days. Over half the people who receive care from the hospice go home after interventions to manage their symptoms.

I visited the Old Hall and was told its history – it has functioned both as a maternity hospital and as a hospice – and the Old Hall now provides a range of community support services, including a neurological day service and a small dementia support cafe. I spent a couple of hours with people with dementia and their carers at the cafe.

The volunteers in both the inpatient unit and the dementia café were such kind and patient people, and included people who had lost loved ones or received support at the hospice and wanted to give something back, as well as several very esteemed professionals who have retired but are now Sue Ryder volunteers and advocates.

The relaxed atmosphere and calm professional presence made the place feel more like a spa than a hospice and that, I think, was down to the many positive people who work there.

So far my Connecting experience has been amazing. I've learned so much I can't possibly do it justice here – I will definitely do it again later in the year.

Want to know more about how Connecting can help you and your team?  The Connecting team (Jane Ellis in London and Roy Axon and Sophie Collinson in Leeds) would be very happy to join in with team meetings – get in touch via the Connecting mailbox (connecting@dh.gsi.gov.uk) or with one of us direct.