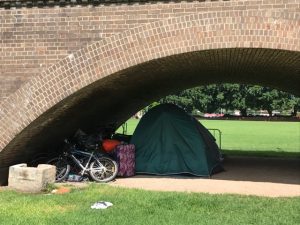 It’s 6.30am on a damp summer’s morning, and the inhabitants of 25 ramshackle tents pitched along the fence line in Belmore Park near Sydney’s Central Station are receiving a wake-up call. A team from HART – the Homelessness Assertive Response Team – is checking on each person sleeping rough, shaking the tent to wake them if necessary, and engaging them in conversation about their physical and psychosocial health as well as addressing their accommodation needs. 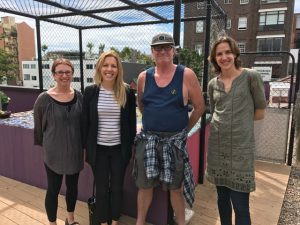 I was fortunate enough to be standing with the team as they carried out this work, when at the end of February I spent 5 days at the International Initiative for Mental Health Leadership (IIMHL) in Australia  .  In addition to the usual conference activities, I spent two days connecting with HART in central Sydney, understanding how they have brought health, housing and addiction services together to really impact on the lives of rough sleepers.

To put it into context, rough sleepers make up 6% of the homeless population in the city.  53% have a mental health problem and 64% have both a mental health and a substance misuse problem.  The average time spent rough sleeping is 5 years and 4 months and the aboriginal population is hugely overrepresented in the homeless population.  The challenges are similar to what we experience here, complex individuals who fall through the gaps, but Sydney have taken, under the leadership of some excellent individuals, a collaborative approach to help reduce homelessness and secure the best outcome for those sleeping on the streets.  For HART, that agenda is to end rough sleeping in the City of Sydney.

On day one of my connecting experience we were driven round the hotspots for rough sleeping in Sydney – highlighted by the number of tents grouped together in small communities in the public parks.    Tents are donated by charity shops, concerned members of the public and homelessness charities.  It is illegal to erect a tent in a public place but thanks to the teams close working with the police, many individuals are able to reside in their tents while the team work with them to find housing and support. The fire service have also been brought in to help individuals understand the risks of placing tents to closely together and of smoking and lighting fires inside tents in the winter.  There was a real focus on minimising harm running throughout the team.

I also sat in on a MDT (multi-disciplinary team) meeting at the local hospital’s homelessness service.  People who had been housed or moved into rehab were really celebrated, and where there were individuals in need of additional support the team made sure a solution was agreed before the conversation moved on.  The hospital had housing for homeless people with physical health needs (e.g. somewhere to stay if you were post-operative, on antibiotics, had a broken bone) to ensure your recovery – thus minimising the risk or re-admittance to hospital, as well as specialist housing for homeless people with HIV.

Meeting both patients and staff gave me a great opportunity to see how good collaboration can really make a difference in people’s lives (and in one setting the patients cooked us a proper Australian BBQ for lunch – although I still can’t enjoy coleslaw – even when it is made Australian style).

On day two we had a 6.30am start to go out with the homeless patrol.  4 teams consisting of youth workers, housing workers, the city homelessness team, a GP, a MH nurse and an aboriginal worker set of to the hotspots we had visited the previous day.  The teams met with those they knew, seeing if they could benefit from any additional support, giving them updates on housing applications and offering medical advice where needed.   They also got permission forms from any new rough sleepers they met, spending time speaking to them about their needs and gaining permission to share data, to help them find housing and access services quickly.

In the past the inability to share data between the housing teams, homelessness outreach teams and medical teams resulted in individuals getting lost in the system of being passed backwards and forwards for months until someone took ownership.   With joint patrols, the teams can address all the individuals needs in one hit.  They all go to the hotspots together – if a client needs to see housing, they’re there; the health workers can fix their physical health needs and record their mental health needs, and bring them in to see specialists or take a specialist to see them. On an average, they can see 120 people in one outreach.   It was really inspiring to see how patient and committed the team were – even before they had had coffee and breakfast!

As one of the team said “There’s this strength in relationships, particularly with the Homeless Health team.  Even though someone needs housing support, their health needs are just as important. For those who find it challenging to go to the GP at 10 in the morning, the reality is it’s just not going to happen, so to have those clinical outreach teams that are constantly available, that’s crucial.”

We had a slightly different experience following our time with the outreach team when we visited the supervised injecting site.  The only such site in the Southern Hemisphere with the aim of harm reduction for dependent drug users.  The centre receives up to 200 visits a day, with some clients presenting several times a day.   Although for me the concept remains a challenging one (I saw the Canadian equivalent a few years ago), there are psychiatrists and housing support workers on site to help individuals who want or need it – and the outcomes for users and the local community have been high (less death by overdose, less danger from discarded needles on the street to name but a few benefits).

According to Service Operations Manager, Miranda St Hill, 70% of their clients are experiencing homelessness. A team from Way2Go work out of the facility, and try to engage clients in a casual, informal atmosphere to offer housing solutions.   After injecting, the clients move into the tea room, and if someone expresses interest in help, they offer linkages. It’s low threshold, a first step in the whole journey in getting them referred.

We finished our two days at the abbey centre – a community project in Sydney which offers a day centre for homeless aboriginal groups, a social enterprise café as well as acting classes and dance classes of older people in the area.  A real mix if individuals, sharing a space and finding ways to keep busy.  We were treated to lunch on the roof with homeless and ex-homeless individuals who had benefited from the services.   I met one man who had been sleeping rough for 10 years when he got into contact with HART.  He now has a home, a job and is in contact with his son.  The homeless users of the service keep bees on the roof – so I brought a jar of honey home – not sure if customs would be too impressed with that but it was worth it!

During the outreach we witnessed a positive outcome for one young man sleeping rough in Belmore Park. Originally from Bathurst, he was delighted to learn the day prior that he had secured housing back in his home town; and he emerged from his tent that morning grinning from ear to ear. We met him again later that morning, busking with his didgeridoo in Kings Cross and giving his friends from HART a little wave of appreciation. A very happy client indeed. 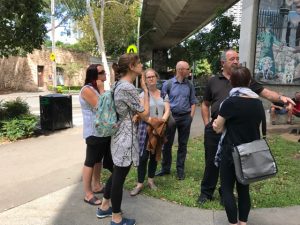 What I took away was the importance of strong leadership and people who are really dedicated to making a difference.  We do have similar services in England, some which are highly effective and successful in no small part to one or two really key individuals – either from health, housing, the police or the third sector.  You can’t bottle that type of leadership and drive, but you can really celebrate it when you see it working and encourage new young leaders to pick up the baton wherever they are.

I look forward to the next IIMHL exchange in Sweden, where no doubt there will be similar lessons to learn.  I guess the question remains, how can we as DH ensure that we are growing and supporting those frontline leaders who are delivering for us in sometimes very challenging circumstances?